tip text   tip text
Sweede, Stillwater & Spruce Mtn Firetower Closures for Hunting Season [2022-09-23]
Here are the dates for the Fire Towers that are closed for hunting season, all dates are inclusive. Please respect these trail closures and private property. Climbs during these closure periods will not count towards the challenge.

Annual Dinner and Meeting will be on Friday October 21 [2022-09-07]
Join us for our annual meeting on October 21st and listen to our featured speaker, Jackie Donnelly, a nature writer and photographer who has spent nearly 30 years exploring the upper Hudson River in her small lightweight canoe.

In her illustrated talk, 'Mother NatureÃ¢â‚¬â„¢s Waterside Garden: Wildflowers of the Upper Hudson,' Jackie will explore several distinct areas of this magnificent river, stretching from the Ice Meadows north of Warrensburg, downstream through the forested mountains at Moreau, to the quiet backwaters above Glens Falls.

Through numerous colorful photographs and informed commentary she will reveal the amazing abundance and diversity of beautiful plants and a few of the fascinating creatures that thrive in this riverbank habitat.

We look forward to seeing you!

The slate of chapter officers will be voted on at the dinner.
Vote for Chapter Officers at the 2022 Annual Meeting [2022-09-07]
At the annual meeting, chapter members will be invited to vote for the new officers.

In the event that there is more than one candidate for any given office, at the annual meeting the Secretary shall furnish a ballot containing the names of all nominees, arranged in alphabetical order, as candidates for each office.

This ballot shall be the exclusive means of voting for officers and members-at-large. The successful candidate for each position shall be determined by a simple majority of the votes cast. Please see ... another page .. for the biographies of these nominees.

Brian Coville: I grew up on Long Island and developed an interest in hiking while exploring Bear Mountain State Forest with my friends. After relocating to the Capital Region in 2015, I began working as an internal auditor at Pioneer Bank and now work as a Financial Services Specialist in the Cybersecurity Division of NYS DFS. I have previously volunteered with the Chapter as Young Members Committee Chair, Nominating Committee Chair, Director, 2nd Vice Chair and currently as Chapter Chair. I currently volunteer at the club-level as a member of the Audit Committee. I also volunteer with the Information Systems Audit Control Association (ISACA) Hudson Valley Chapter on the Board of Directors and with Saratoga PLAN as a steward of the Orra Phelps Trail.

Kim Brown: I have been a member of the ADK Glens Falls - Saratoga Chapter since 2012. Over the years IÃ¢â‚¬â„¢ve been fortunate to make new friends and learn from many who have taken the time to share their outdoor experiences with me. Looking to give back, I became more actively involved with our Chapter upon my retirement in 2018. Currently I serve as both Education Chair First Vice Chair earlier this year I became a hike leader. I also enjoy volunteering as a trail and summit steward so that others can learn to enjoy the outdoors safely and with care for the environment.

Steve Mackey: I have been an active member with the ADK Glens Falls - Saratoga Chapter since the early 80s and IÃ¢â‚¬â„¢ve already served as the Chapter Treasurer for 7 years. I also have participated in the Adopt- a- Lean-To program, with Jim Ã¢â‚¬Å“JungleÃ¢â‚¬Â Mosher, taking care of Ward Brook Lean-to, for over 30 years. We have always maintained the trail into Ward Brook Lean-to, so a couple of years ago, I made it official and adopted the 5 miles of trail. IÃ¢â‚¬â„¢ve been busy improving the trail up Potash Mountain in Lake Luzerne the past few summers, as well as the new trail up Swede Mountain. If you have never been up either, make it a point to put them on your hiking schedule. I lead hikes regularly and do a lot of trail work with the 46Ã¢â‚¬â„¢ers trail crew. I am retired now, but I spent my career as the owner/operator of the Luzerne Market which has been operating for 42 years.

John Caffry: I have been an ADK member since 1985 and have served the Club in many capacities, such as member of the Chapter Executive Committee since 1987; former Chapter Publicity Committee Chair and Second Vice Chair; Chapter Secretary from 2006 to 2015, and starting again in 2018; Chapter Chair from 2016 to 2017; former member of ADK Board of Directors and Executive Committee; former chair of ADK Headquarters Committee; and former chair of the ADK Conservation Committee; and participated in the Adopt-a-Lean-to program for 10 years. Occasionally, I find time for hiking, paddling, and all varieties of skiing.

Maureen Coutant: IÃ¢â‚¬â„¢ve been an active member of ADK Glens Falls - Saratoga Chapter since the early 1990s. IÃ¢â‚¬â„¢ve led hikes, chaired the nominating committee, served in the Vice Chair positions, and as the Chapter Chair twice. Currently I help out the Banff Film Festival Committee to bring the festival to the Glens Falls area every February. IÃ¢â‚¬â„¢ve helped with other nonprofits and know that itÃ¢â‚¬â„¢s hard to find volunteers, so IÃ¢â‚¬â„¢m always willing to help when I can.

Jeffrey Mans: My first Adirondack adventure was a canoe and camping trip from Old Forge to Blue Mountain Lake along the Fulton Chain of Lakes in my teens, and I was smitten by the beauty of the Adirondacks. After graduating from Albany Law School, I settled in the Albany area and began my long term relationship with the Adirondacks, becoming a 46er in 2006, and more recently a winter 46er. During this time I had the good fortune of meeting and joining members of the ADK Glens Falls - Saratoga Chapter on outings that introduced me to a variety of activities and like-minded individuals. I have been an ADK member for a number of years, and became an Outings Leader in 2019, and since that time have continued to regularly lead outings to explore, camp and hike the Adirondacks year-round. My initial sense of wonder, enthusiasm, and inspiration are still present today each time I enter the Adirondacks to experience the land I love best.

Kathi Noble: I have been a member of the Adirondack Mountain Club (ADK) for many years, becoming involved with the Glens Falls - Saratoga Chapter in 2011 when my husband and I took over as the ADK Fire Tower Challenge Correspondents. I have served in the past as the chapterÃ¢â‚¬â„¢s chairperson and secretary. I retired in 2014 after 34 years of teaching special education. I fill my days hiking, biking, skiing, paddling and many other outdoor activities. I also volunteer as a ski instructor at the Double H Winter Adaptive Ski Program and as a trailhead steward at HPIC.

Thomas Khairallah: During the pandemic, my wife Kellie and I moved to the Saratoga area where Kellie's roots are and where I fell in love with the nature in the area and the mountains north of it. I currently work remotely for a software company called Servy where I enjoy the innovation of an e-commerce product while still having the ability to go and meet with my team and my company's clients around the country and globe. I have always enjoyed volunteering for local clubs and causes and it all started in Lebanon where I was constantly volunteering with various charitable organizations, blood drive organizations, and others. I have become very attached to the Adirondacks even before settling in the Saratoga region as I'd visit with friends and family. The nature and the mountains remind me so much of my home country where I was constantly hiking, climbing, skiing and have always found myself attracted to the mountains.

The shuttle system helps manage safe, sustainable visitation along the busy Route 73 corridor in the Adirondack High Peaks region. The free shuttle system will operate on weekends and holidays through Monday, Oct. 10, 2022. New this year, additional runs on select weekends in August and October will be piloted from Frontier Town Gateway in North Hudson.

Adirondack Voices [2022-09-16]
The Adirondack Mountain Club is nothing if not for the stories of members; we are our stories. ADK at 100 years has lost so many stories; more are being lost each year. It is ironic that this storied organization does not have a formal history program, a commitment via human and financial resources or at least a mention in its guiding strategic plan.

Recognizing the need to capture Adirondack Mountain Club oral history - a dedicated group of passionate volunteers from throughout organization has banded together to make this a reality. Funding has been provided by generous donations from ADK chapters.

What is ADK Voices?

We are a group of ADKers from across New York State and New Jersey working in collaboration with OurStoryBridge, a nation-wide platform, resource and toolkit for producing a crowdsourced community story project emphasizing audio history and sharing. Using OurStoryBridge we are recording short stories (five minutes or less) of ADK chapter folks, ADK staff - past and present, stories of the past and stories of the present for use as historical record.

The recorded stories will be publicly accessible on a website we are currently building with the expectation the ADK administration will link ADK Voices to adk.org. Our group is proud and excited to bring this member-directed, chapter-driven project to reality.

Do you have a story to tell? Send an email with a summary to: trails@adk-gfs.org

These bear-proof canisters are required in the Central High Peaks Zone and are essential to use on any backcountry overnight adventure to any backpacking or canoe camping destination.

Designed to slip into your backpack. BackpackersÃ¢â‚¬â„¢ Cache (Garcia Manufacturing) and Bear Keg (Counter Assault) are the only two bear resistant food containers approved for use in the Central High Peaks Zone.

This means that their current Vimeo OTT platform will be shut down from June 11th onwards.

When new links are available, our chapter website will be updated with those links.
ADK Mtn Club Advisory Council Jan 18 Hilights [2022-02-19]

The ADK mission statement has changed and is no longer stated as a 'member directed' organization.

If you have any comments, thoughts, concerns, suggestions regarding ADK in any way, shape or form, please let Jim Schneider ( trustee@adk-gfs.org ) know and he will communicate them to Kate.

Public access is due to the hard work of Warren County folks and community leaders. Most importantly, the trail traverses private property to access the tower. The landowner requests hikers stay on the trail at all times. Please respect private property.

The trail is closed to public access September 10 - December 16 due to hunting club leases. Climbs during the closure period will not be accepted toward the challenge.

The New York State Department of Environmental Conservation institutes a voluntary trail closure in the Eastern High Peaks during this time of year that asks hikers to refrain from traveling above 3,000 feet.

HereÃƒÂ¢Ã¢â€šÂ¬Ã¢â€žÂ¢s a big way you can help: if you encounter a muddy patch on the trail, walk right through it! Skirting to the edges widens trails and creates even more mud, so help out your fellow hikers and stick to the trail. This is where good footwear comes in handy!

Or mail your report to: 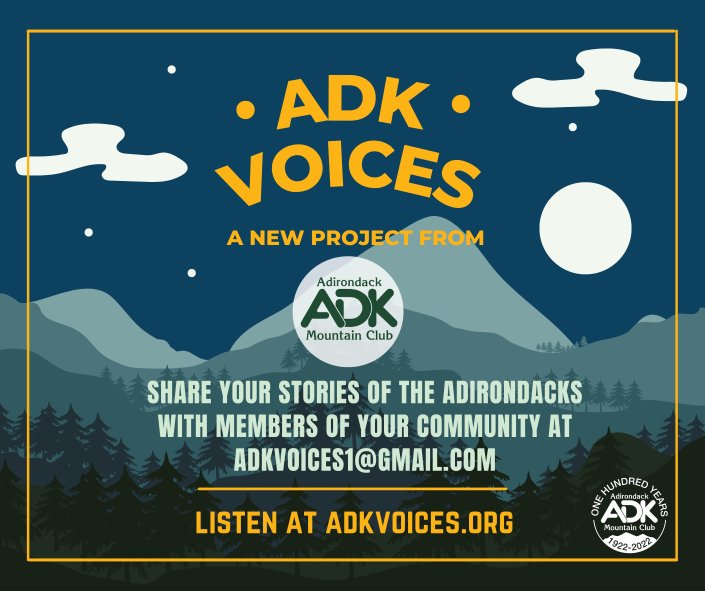